thenurseandthebuilder Standing still is boring. Get outside!

The border crossing from Israel to Jordan was surprisingly super easy. The taxi driver dropped us off on the Israeli side and we walked over the no mans land. Jono thought the area between Israel and Jordan would be a fantastical place to try and take a quick photo. The guy with the machine gun didn’t agree. I guess decisions like this come from the same part of Jonos brain that think it’s a good idea to pack fireworks into his checked-in plane luggage and drive a car that’s not his into a muddy slurry pool in the middle of nowhere (but that story comes later).

END_OF_DOCUMENT_TOKEN_TO_BE_REPLACED

Eilat and the Ever Lovely Red Sea

Highway 40 through the Negev was seriously spectacular! Clare even took us on a cool little side journey to see two huge craters. It was so dry and arid, but so picturesque. Everything was closed in the tiny town we planned to stop in for lunch, but luckily we had some left over food in our packs, so we stopped for a nice little picnic in the park. Eventually we made it to Eilat but not before stopping once or twice along the way to take in the magic of the scenery. Feeling pretty beat from the long driving day we sussed out our airbnb apartment and grabbed some breakfast things for dinner from one of the only corner stores we could find that was actually open. It took quite a search to find too.

END_OF_DOCUMENT_TOKEN_TO_BE_REPLACED

From the lowest point on the surface of the Earth

We were all sad to leave the beautiful Galilee area and the north of Israel. We took one last look at the Sea before we dragged our eyes away and headed south down towards the Dead Sea.

END_OF_DOCUMENT_TOKEN_TO_BE_REPLACED

The Scenic Sea of Galilee 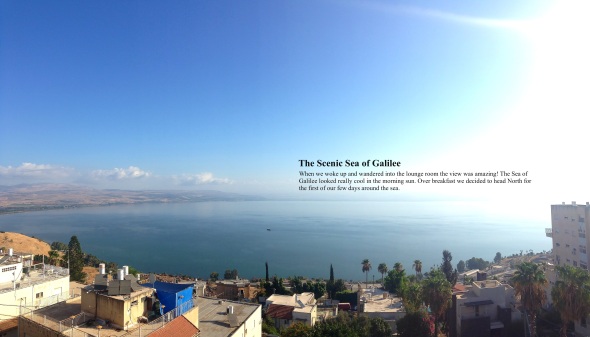 When we woke up and wandered ibto the lounge room the view was amazing! The sea looked really cool in the morning sun. Over breakfast we decided to head North for the first of our few days around the Sea of Galilee.  END_OF_DOCUMENT_TOKEN_TO_BE_REPLACED